This Web edition was produced by the Principia Cybernetica Project for research purposes. This book is copyrighted material. If you intend to use part of the text or drawings, please quote the original publication and make detailed references to the author.

The following information pertains to the original book edition: This work was first published in France under the title Le Macroscope. Vers une vision globale. Printed in the United States of America. No part of this book may be used or reproduced in any manner whatsoever without written permission except in the case of brief quotations embodied in critical articles and reviews. 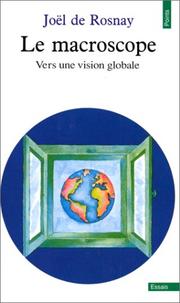 Translation of Le macroscope. Ecology The Economics of Nature: Economics and Ecology Universal Currency: Divergence; The Final Explanation: I should like to thank here all those who have given me their advice and their help in the conception and the editing of this book.

The fruitful discussions of the Group of Ten, led by Jacques Robin, have permitted me to elaborate on my train of thought and to compare it to that of others. Stella has been not only my advisor at every moment and the laboratory of my ideas but also a valued assistant. Finally, I owe particular thanks to Catherine Fourneau-Faye for the successive typings of the manuscript, her advice, and her encouragement; to Anne Boissel-Puybaraud for her understanding in the execution of the drawings; to Babette Roumanteau for her careful readings and rereadings of the manuscript and her judicious corrections of its style.

The microscope has permitted a dizzying plunge into the depths of living matter; it has made possible the discovery of the cell, microbes, and viruses; it has advanced the progress of biology and medicine.

The telescope has opened the mind to the immensity of the cosmos; it has traced the path of the planets and the stars and has prepared men for the conquest of space.

Today we are confronted with another infinite: We are confounded by the number and variety of elements, of relationships, of interactions and combinations on which the functions of large systems depend. We are only the cells, or the cogs; we are put off by the interdependence and the dynamism of the systems, which transform them at the very moment we study them.

We must be able to understand them better in order to guide them better. And this time we have no instrument to use. We have only our brain–our intelligence and our reason–to attack the immense complexity of life and society. True, the computer is an indispensable instrument, yet it is only a catalyst, nothing more than a much-needed tool.

We need, then, a new instrument. The microscope and the telescope have been valuable in gathering the scientific knowledge of the universe.

Now a new tool is needed by all those who would try to understand and direct effectively their action in this world, whether they are responsible for major joeo in politics, in science, and in industry or are ordinary people as we are.

I shall call this instrument the macroscope from macrogreat, and skopeinto observe. The macroscope is unlike other tools. It is a symbolic instrument made of a number of methods and techniques borrowed from very different disciplines.

It would be useless to search for it in laboratories and research centers, yet countless people use it today in the most varied fields. The macroscope can be considered the symbol of a new way of seeing, understanding, and acting Fig. Let us use the macroscope to direct a new look at nature, society, and man and to try to identify new rules of education and action.

In its field of vision organizations, events, and evolutions are illuminated by a totally different light. The macroscope filters details and amplifies that which links things together. It is not used to make things larger or smaller but to observe what rosmay at once too great, too slow, and too complex for our eyes human society, for example, is a gigantic organism that is totally invisible jjoel us. Formerly, in trying to comprehend a complex system, we sought the simplest units that explained matter and life: Today, in relation to society, we are the particles.

This time our glance must be directed toward the systems which surround us in order to better understand them before they destroy us.

The roles are reversed: There is much talk today of the importance of a “vision of the whole” and of an “effort to synthesize. Unfortunately, our education has not prepared us for this. Look at the list of university disciplines; they divide nature into so many private properties, each carefully isolated from the others. More simply, recall the basic education you received in school: English, mathematics, science, history and geography, government, or modern language–so many fragmented worlds, the vestiges of a scattered knowledge.

Should one hold on to the “analytic method,” which isolates elements and variables in order to examine them one by one? While the experts are isolating, analyzing, and discussing, the technological upheavals and the cultural revolution impose new adaptations on society.

The growing gap in time between the perception of ds problems and the arrival at major decisions makes our analytic methods appear even more inept. Another approach, a complementary one, exists and will often be discussed in this book. This is I shall explain the choice of the term the systemic approach.

This new approach is symbolized by the macroscope. It emphasizes a global approach to the problems or to the systems macrosocpe one studies, and it concentrates on the play of interactions among their elements. What practical bearing does it have on resolving global problems Can it help us to enlarge our vision of the world, to better transmit knowledge, to free new values and new rules that can motivate and support action? This book tries to answer these questions. It is intended to be practical.

I have, therefore, turned my back on macrosfope classic organization of the “linear” book, in which ideas, developments, and chapters follow one another in sequential form.

That is a corridorlike, tunnellike book, a one-way traffic in which one understands the end only when he has assimilated the facts given at the start. I prefer the “intersecting” book to the linear book. You pick it up where you want; you pursue it according to your desires by following several simple and precise rules from the beginning.

Thus, if you wish, you will be able to compose a book a la carte, one that corresponds as much as possible to your own interests and to what you hope to find in it. That is why the chapters and sections of The Macroscope are relatively independent modules, all of which play a part in leading toward the vision of the whole. For those who prefer to be guided, I will describe the “logical” approach.

Then one moves into the macroscopd cone, to the applications and the diverse propositions or suggestions that I submit for consideration Fig. The first chapter, Through The Macroscopeis essentially didactic but is presented in a way that I hope is original. Here I apply systemic principles in order to bring out the functioning of the principal systems of nature.

It is also a primer for those who want to acquire rapidly the fundamentals of modern ecology, economics, and biology. From the ecosystem to our extraordinary universe, the stages of the voyage are: The second chapter, The Systemic Revolution: A New Cultureis an introduction to and a training in the new method of approach to complexity. The purpose of this chapter is to unveil the basic concept of “systems,” to bring to light fundamental laws, general principles, and the properties that relate the principal systems of nature.

This is the key to the book; it tells how to use the macroscope. In the three chapters that follow, Jole and Survival, Information and the Interactive Society, Time and EvolutionI shall try to apply the systemic approach to three fundamental fields of knowledge: These three chapters constitute the heart of the book because they illustrate its purpose. In fact energy, information, and time are the eternal elements on which all action depends–the sequence of all knowledge and meaning.

To envisage their multiple implication at the physical, biological, social, and philosophical levels, I propose to use the macroscope. The sixth chapter, Values and Educationconsiders how the global vision particularly the new generation’s views on nature, society, and man can set forth new values, outline tomorrow’s education, and bring out the features of a new type of emerging society.

The last chapters necessarily return to the first, for the first chapter tries to apply the principles of a new form of education. In fact the basic elements of the systemic education treated in the sixth chapter are the very principles that I put into practice in the rosnau of the book. You may, if you like, begin this book at the end, with the Scenario for a World.

Or you can follow another route; macrozcope, for example, you are interested in biology and ecology, and if you know economics and business well enough, then read first the sections on the cell and the ecosystem. If you are macrroscope with cybernetics and the systemic approach, then go directly to the sections on energy, information, evolution, and time.

I should also like to “spread” a new form of communication throughout this book. Rossnay Macroscope is not a book that intends to popularize difficult scientific concepts, even though the first part, with its numerous illustrations, presents complicated subjects in a simple manner. The popularizing book concentrates on a given field of knowledge and tries to present it in a language accessible to everyone. To grasp a general concept ronsay draws on several disciplines, to succeed in a personal synthesis of scientific, economic, and sociological facts, is often difficult.

It is also difficult to unify a “mosaic” of. The popular books allow the reader to be led by the author, the reader depending on the author to “take him by the hand” and help him over the difficult passages. I am anxious for a new form of dialogue. Rather than supply portions of pure knowledge, I should like to stimulate inventive thought–the imagination. I prefer to make you use your capacities for reflection, intuition, and synthesis.

To be sure, such a participation demands an effort; yet I am convinced that that is a form of communication that truly fulfils the mind.