Seemed like the thing to do. I read Hunter S. Thompson’s “Fear and Loathing in Las Vegas” while actually in Las Vegas three decades ago when it was a big deal, so I should certainly read Greenstein’s opus when poker is the biggest deal going.

The dramatic high-resolution photos? They almost seem 3-D. Greenstein dedicates his “Advanced Poker Guide” to the children of gamblers, who might not have gotten the quality time with their parents that they wanted, and he apologizes to his children by name “for when I have failed as a parent. The “wannabes,” Greenstein writes, “would have a better life if they put the time and effort they spend on gambling into a more productive vocation.

One of Greenstein’s motives was to write a poker book that shows people how to make money, not just how to make plays.

Review of Barry Greenstein’s “Ace on the River”

Even Doyle Brunson, who has produced two of the best poker bibles around, advises people to read this book for acce reason. Early on, Greenstein makes the point that many players are regularly broke and only a small percentage make a net profit, and he uses his own story of going broke as a cautionary tale. 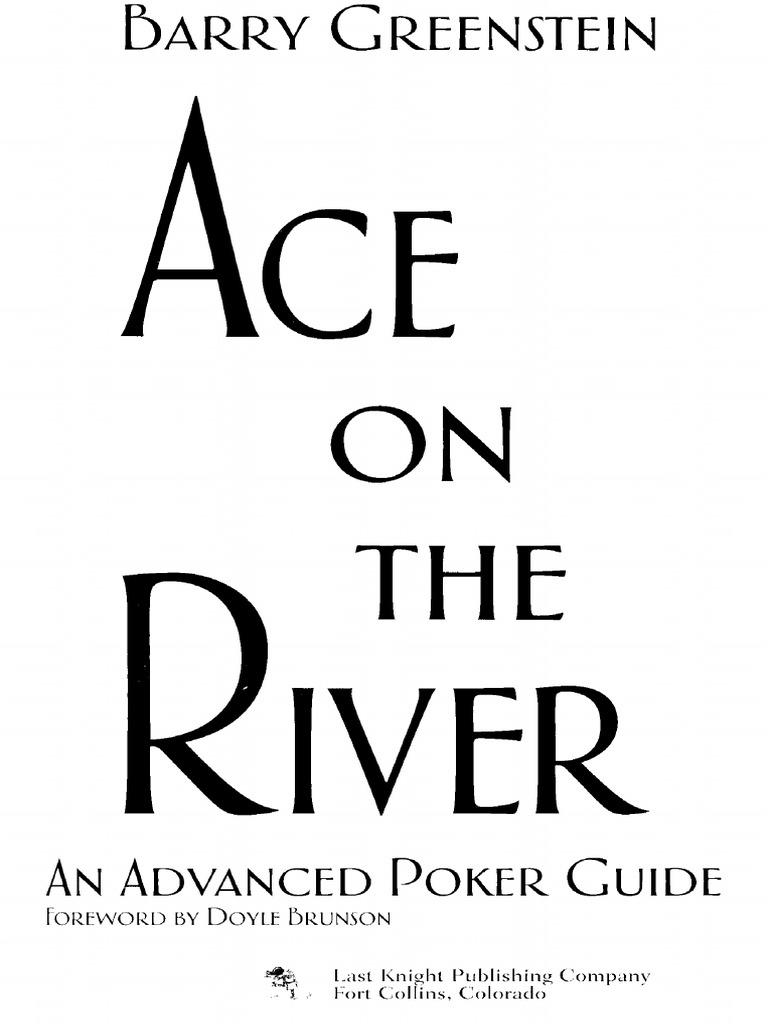 Greennstein, of course, has rebounded well enough to be in a position to give his tournament winnings to charity because he has become a winning player in the big game with Doyle, Chip and them, but the early parts of his story explain the financial and psychological vagaries of poker.

The chapter on poker society is not just a dictionary of jobs in a casino, but an advice guide, like this:. They can supply you with information about good games. If you give them your number, they can contact you when a live one is playing or, more importantly, when he is planning fiver play.

An advance call may prevent you from being locked out. Greenstein is amazed at how many people show their losing hands and even explain how they made the right laydown, because by doing so, players give away their strategy.

Same goes for showing bluffs. You show people how to play against you. One thing I have a problem with is Greenstein’s statement that “it’s important greensetin prevent the catalysts in the game” – big losers with lots of money or winners who give action – “from destroying themselves. It’s bad business to destroy people. Does Greenstein mean you soft-play the live ones so they stay live ones?

He doesn’t say, but for a guy who claims to play rier hand the way it needs to be played, this point has a whiff if suspicion.

Greenstein offers a personality assessment test so the reader can determine whether he or she has the appropriate character qualities to become a good poker player. If you answer yes to any of the 12 questions about managing your money and ae, you may have to make some adjustments if you intend to try this for a living. The personality assessment is followed by a fill-in-the-bank section: Here, Greenstein provides two wonderful sections that allow you to evaluate honestly whether you’re fit to endure and prosper in this killer way of life.

These two sections alone are worth the price of the book. I mean, where else can you get a psycho-therapy section for the cost of a green chip? He stresses completing your education. Specifically, he says the best degree for a poker player is a major in psychology with a minor in math. I can only say for sure that a degree in journalism only prepares you to write about poker players, not become one.

Focus on weaker players, because that’s where you’ll make your money, and in mixed games setups, choose games based on your opponents’ weaknesses more than your strengths. In the advanced play section, Greenstein deals with the math of poker by saying you don’t need to be good at math, and makes other good points on bluffing and buying in for the minimum but be disciplined.

The layout of the No-Limit Hold’em tournament hands is a great way to learn how the pros think their ways through hands, and for a man as self-confident as Greenstein some would say egotistical give him this: In all, this is almost an anti-poker book. With chapters that detail the poker world, philosophy, managing your life and your money, Greenstein is not trying to get more people under the tent. No, in fact, he has written a book that should scare people off.

But for all his insight into the mental makeup of a good poker player, I don’t think he’ll succeed in separating the riff from the raff. Poker, after all, is about deceiving people, and most players start by deceiving themselves.

To help make this website better, to improve and personalize your experience and for advertising purposes, are you happy to accept cookies and other technologies? Greenstein’s book a full house d Steve Rosenbloom. Lewis leaving as Bengals coach, endorses Hue Cincinnati Bengals.

Greenstein hits on the flop with Ace on the River

Jon Jones still fighting greensteih the asterisk 1d Brett Okamoto. Which QBs could be on the move in ? How does your team measure up? Along with his contributions to ESPN.